It has been an interesting experience creating this installation. Most of the projects I initiate involve working with others, some sort of physical journey, project managing and curating the events whether indoors or outside in partnership with a fairly hands off organisation, and a process of learning and making new work.
This exhibition / gathering of artworks, as with the last one (Swimming and Other Things) which was in the same space, also has these processes. In S&OT, three years of paintings were exhibited for the first time, friends / artists with interests that overlap with my own were invited for discussions and to create music.
Lunch with Mohammad Hafeda, Sophie Hope and Barry Sykes, involved discussion about the exhibition context and from a process perspective. It was followed by a walk along the river, from the gallery close to the Thames Barrier, to the Royal Arsenal, looking at building sites along the way and arriving to coffee in the most recent Carbuncle Cup winner - a new build in central Woolwich.

It was unusual for me to work with artists while we are all based apart from each other, for usually I am in close proximity to those with whom projects bubble up.
Omar Ibrahim and Rabee Kiwan were unable to visit due to current visa restrictions (the UK is losing out), and Ola Stahl hoped to be passing through London with another project and participate in a two day stopover, but logistics did not allow that. Taking the Eurostar to meet the painters and collect their works, I found highly symbolic. It was disturbing to take the train, knowing that so many people have recently lost their lives on the tracks trying to make the journey from France to England, while I passed through easily, with these related artworks.

As it is just me on site, and there is a trust with the artists, I have been playing plenty of music in the space - Bjork seems to fit well, and Nils Frahm, who I was listening to when painting Invisible City, has had a lot of air. The next couple of days I will make another video talking through some of the processes behind S&OT (Swimming & Other Things) paintings collection. As Ola pointed out, this could be a form of performance, bringing the process to the forefront, where in painting (exhibition) situations that is usually hidden. Definitely pricing systems and questions of ownership are kept behind the scenes.

Omar Ibrahim and Rabee Kiwan are accustomed to formal spaces; Omar shows and sells regularly in Paris, and Rabee was established in Syria but his gallery was bombed. Mark Hachem now shows his work in a professional context, and he is in a number of collections. Exhibiting my paintings with the works of Rabee and Omar has encouraged me to think of traditional formalities such as signing and pricing, which they both have clearly established. I also made a piece that changes over time, with brightly coloured flowers gradually turning into browns, with condensation and mould in the piece. It cannot be kept and owned in a static form, as with many of my land art and public space pieces, but it is more contained than previous such works.

​Within the exhibition ideas around identity, migration, gentrification, the city, the body, and conflict are evident. I think art can make it possible to face and talk about things that otherwise can be too big, sad, or confusing to address. People have fed back that there is a lightness in this exhibition, I think so too, maybe because the artworks have space to breathe and conversation to share. 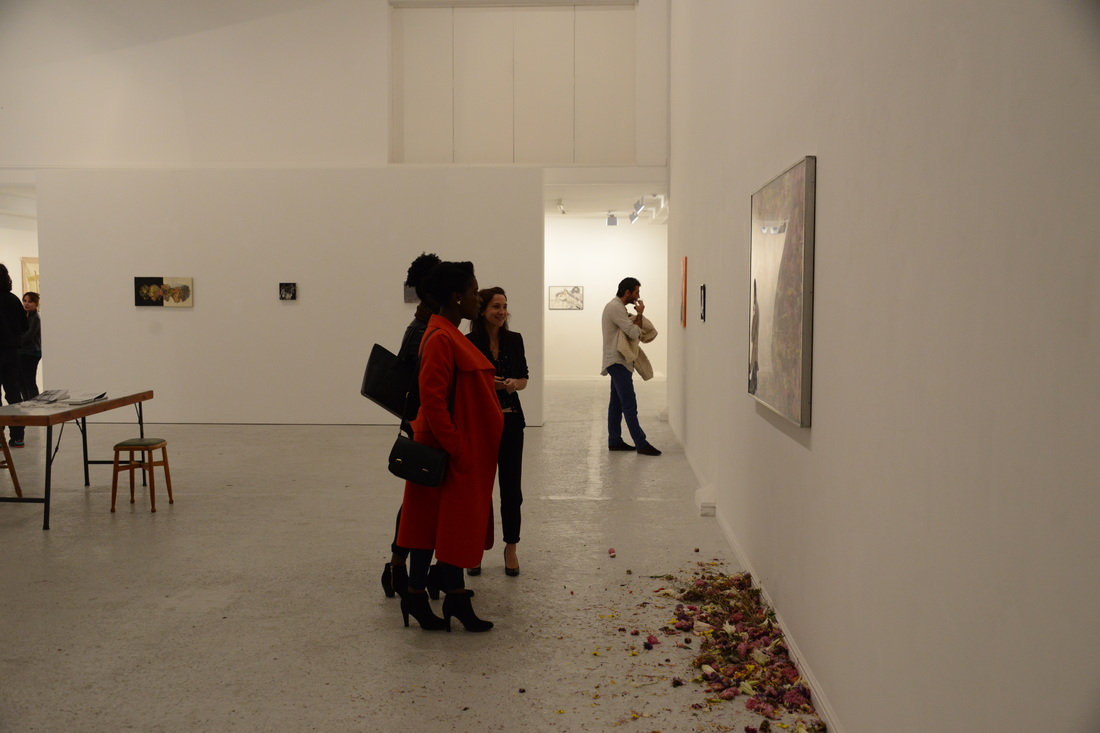 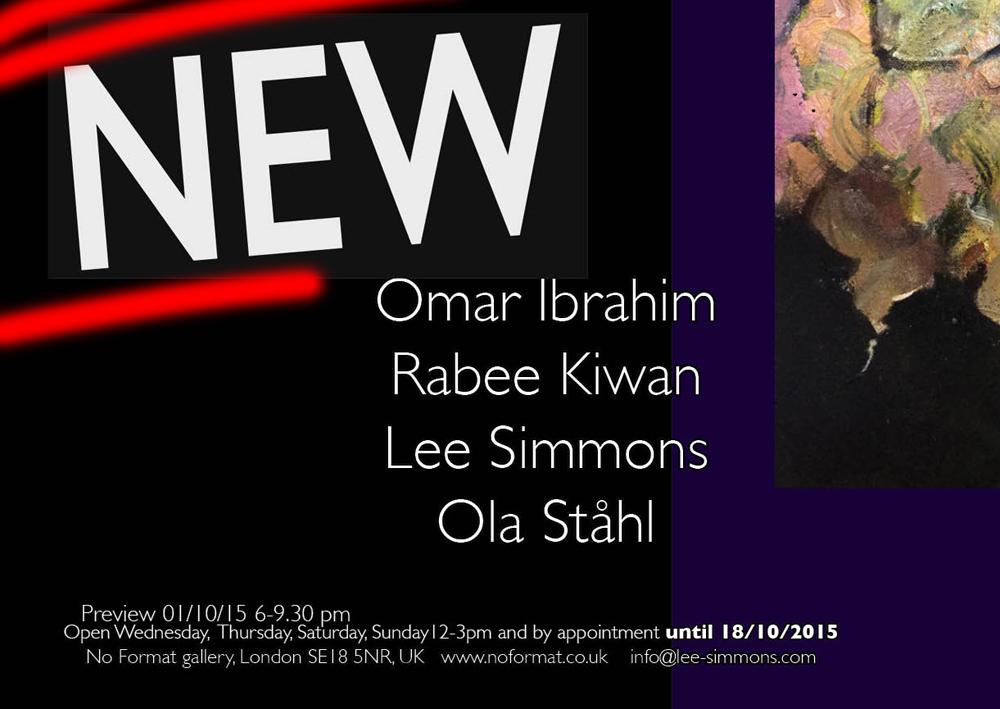 The exhibition is curated by Lee Simmons, who first met Rabee Kiwan and Omar Ibrahim in Beirut in 2012 and 2013, and Ola Stahl in London in 2006. The informal friendships and working relationships have led to this unlikely group show, bringing together oil paintings from Rabee Kiwan, ink drawing and mixed media painting from Omar Ibrahim, painting and installation from Lee Simmons, and an artist book from Ola Stahl.

It can be considered unusual for these artists to show together, with such differing practices and backgrounds. A thread running through, of the human body, the city, growth, and loss combined with current circumstances has allowed for this patchwork to evolve. Lee Simmons and Ola Stahl have a long-standing interest in urban development, and Rabee Kiwan and Omar Ibrahim continue to paint whilst living away from their base in Damascus due to the on-going conflict in Syria. Omar Ibrahim is now living and working in Paris, exhibiting regularly with local artists. Rabee Kiwan exhibits worldwide with support from Mark Hachem Gallery.

Omar Ibrahim graduated from the Sculpture Department of the Faculty of Fine Arts at Damascus University in 2002. His work often depicts the female body, and how it changes with societal pressure, and also the city - which he depicts as a horse, often entangled in wire. The works share something of his feeling in response to the conflict in Syria.
​
“It's not something that you want to go through. It just pushes out of you. This is who you are in this part of your life. You cannot just draw flowers or beautiful women if you are living in this atmosphere."

Rabee Kiwan graduated from the Painting Department of the Faculty of Fine Arts at Damascus University in 2008. He participated in group exhibitions at Arab and French Cultural Centre, Opera House and Annual Spring Exhibition in Damascus from 2009 to 2012. Since 2010 his works have been shown at Kuzah Gallery in Damascus; since 2013 Mark Hachem Gallery has been exhibiting Kiwan's works.

“The main element of my work is the human figure in all its states and manifestations. Since the beginning of my career, I took inspiration from the observation of reality, trying to imitate it in the composition of my works, at the same time playing with the material in an expressive manner”

As time has passed Kiwan’s paintings incorporate increasingly muted colours, with the piecing together of previous materials, and use imagery from his passport.

Lee Simmons graduated from the Fine Art department of Liverpool John Moore’s University in 2000 (Ba Hons), Art and Design, Chelsea London Institute in 2004 (Masters) and Art Psychotherapy department, Goldsmiths University of the Arts London in 2011 (Masters).
Included in this exhibition is her most recent painting of a cityscape.

“The group of buildings look a bit like a tooth that has been removed, and they could be anywhere”.

Simmons put the exhibition together having met the artists at different points in their lives and on detecting shared interests concerned with painting, politics and the city to further explore. She will also be developing her installation art in the project space, which includes singer Emily Churchill Zaraa.

Ola Ståhl holds a PhD and an MA from the Department of Fine Art, Art History and Cultural Studies at The University of Leeds and a BA (Hons) in the History of Art, Design and Film from Sheffield Hallam University. He has exhibited and performed internationally since the late 1990s. Currently, a Senior Lecturer in the Theory and History of Art and Design at the Department for Design, Linnaeus University, Sweden, he has previously taught at London College of Communication and Central Saint Martins College of Art and Design.

Ståhl is an artist and writer interested in art and politics, he will present an artist book that deals with issues around gentrification, thus responding, in a way, to the site itself.